For Immediate Release – October 23, 2019
PVGP supporters gathered on Monday, October 21, 2019 at the Hofbräuhaus Restaurant on the South Side to take a victory lap. This year-end event recognizes the contributions of our sponsors, partners and car clubs and honors our volunteers who make this event possible. It was a wonderful night to celebrate all the wonderful things our event achieves. The celebration has grown so much in popularity that this year the PVGP took over the Hofbrauhaus’ main bier hall and terrace.
The night started with a greeting from our Charity Ambassadors at Merakey Allegheny Valley School and the Autism Society of Pittsburgh. They represent the hundreds of individuals from our charity partners and are the reason we all do this.
Over 75 sponsors and car clubs were on hand to be recognized for their support – receiving plaques and framed posters to mark their efforts. PVGP executive director Dan DelBianco summed it up by saying “everyone in this room plays a key part in the success of the Grand Prix. Tonight we have our generous sponsors and vendors, our dedicated volunteers, our strategic partners, the City of Pittsburgh and our car clubs and racers that make up our shows. We could not do this without the coordinated effort of everyone.”
List of 2019 PVGP sponsors  and Car Club Partners and our Grand Volunteers
John Putzier, CEO of the Greater Pittsburgh Automobile Dealers Association, and Presenting Sponsor of the PVGP since 2014 took the podium to announce that their Foundation approved their presenting sponsorship again for 2020, and that they are honored to be a part of such a great organization of loyal volunteers. The Greater Pittsburgh Automobile Dealers Association (GPADA) represents all 150 franchise new car dealerships in Western PA which makes major charitable contributions throughout the region through its Foundation, the GPADF. 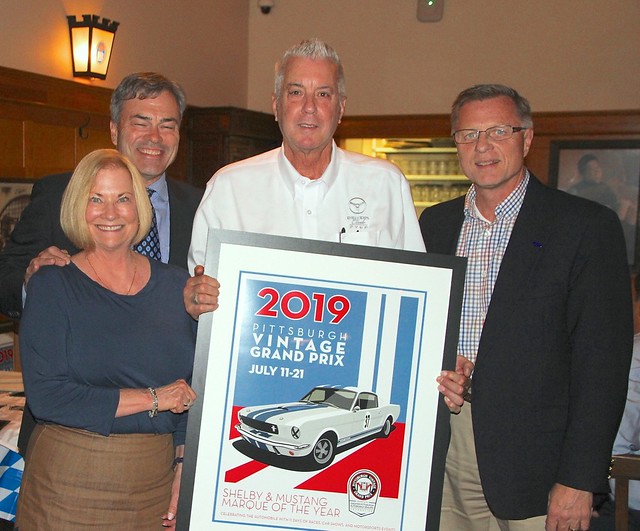 Marque of the Year Fundraising Record
Last year, the BMW Club and the Pittsburgh BMW dealers set the record for PVGP Marque of the Year fundraising with $126,500. This year Shelby and Mustang exceeded that record with $132,500! This amount represents the funds raised through the sponsorship of the Neighborhood Ford Store, Ford Performance and the Shelby American Automobile Club convention. It also includes Mustang and Shelby race entries and proceeds from the Mustang owners appearing at car shows and parties.. The Greater Pittsburgh Mustang Club members supported the efforts all week long and brought more than 200 cars to Schenley Park!

“Neighborhood Ford Store worked closely with the Shelby Convention, Ford Performance, the Greater Pittsburgh Mustang Club and our region’s Ford Dealers to ensure Shelby and Mustang displayed leadership as the Marque of the Year for the 2019 Pittsburgh Vintage Grand Prix,” said Joseph Thurby, Chairman of Neighborhood Ford Store.“That leadership also involved the joy of raising a record donation to support local autism charities. We are privileged to support families in our communities that can benefit from our participation.” The Neighborhood Ford Store is a regional organization of 80 Ford Dealers throughout western Pennsylvania, central and northern West Virginia, the panhandle of Maryland and eastern Ohio that have been Platinum sponsors of the PVGP since 2005. Hofbräuhaus Pittsburgh
Hofbräuhaus Pittsburgh Brewery & Restaurant a valuable sponsor partner of the PVGP and we are pleased to hold this year end event there. The restaurant is located in the Southside Works district with a breathtaking view of Pittsburgh’s riverfront and is a place where family and friends can enjoy great biers, great food and fun times. Guests are able to enjoy the traditions from Germany that have made Hofbrauhaus famous. It starts with a wide selection of traditional Bier brewed on site every day with flavorful seasonal selections every month.

The Pittsburgh Vintage Grand Prix, presented by the Greater Pittsburgh Automobile Dealers Foundation, is the country’s only vintage street race and one of the premier automotive events in the world. 2020 will be our  38th consecutive year of hosting a 10-day motorsport festival from July 17 through 26. It starts with our Historic Races at Pitt Race Complex and builds throughout the week with car shows, parades, a Blacktie Gala, a Tune-Up Party, including the Passport to Elegance Jet Center Party. The event culminates with our signature vintage races through the stone wall, hay bale lined streets of Schenley Park surrounding a golf course with 2,500 show car shows and 200,000 spectators on the July 25/26 weekend.

The Pittsburgh Vintage Grand Prix Association is a 501 (c) (3) non-profit organization with a mission to raise funds for individuals with autism and intellectual and developmental disabilities. Since 1983 we have donated nearly $6 million help our community.