The PVGP has named Shelby & Mustang as their honored 2019 Marque of the Year. They will be the focus of each event during all 11 days Pittsburgh Vintage Grand Prix. To add to the excitement, the Shelby American Automobile Club and Team Shelby will hold their convention in conjunction with the PVGP on July 11-13. The PVGP poster, featuring a GT350 was created by Dan Holmes, who has been the graphic designer for the Grand Prix for 15 years!

Shelby Conventions
For the first time on the east coast, the Shelby American Automobile Club (SAAC) and Team Shelby are combining forces to stage their national convention and they are doing it during the 2019 PVGP! Register your Shelby for the Convention on SAAC44. On Thursday, July 11 through Saturday, July 13, the SAAC-44 National Convention and Team Shelby East Coast Grand Nationals will be held during the PVGP Historics at Pittsburgh International Race Complex (PIRC) race weekend in Beaver County. This will be the 16th year that the PVGP will race at the 400-acre motorsports facility featuring a 2.8-mile road course with 19 corners and multiple elevation changes, a .83-mile Wilson Karting Track that is one of the fastest around, and a 6-acre paved skid pad for autocross and drifting. Pitt Race offers something for all motorsport enthusiasts.

Look for hundreds of Shelby’s and thousands of enthusiasts to converge on PIRC for high performance track days, a road rally, a Poker Run, Concours Judging and popular ballot car shows, and a few surprises.  There will be action on the track and events on both Thursday and Friday for registered participants. See the detailed schedule at bottom of this page. Chuck Cantwell, project engineer for the Shelby GT350, will be here for the SAAC Convention at Pitt Race and is coming to Pittsburgh throughout Race Week, appearing at Walnut Street, the Tune-Up and the Jet Center before leading the parade of Shelbys and Mustangs through Schenley Park on the July 20/21 weekend. Chuck was the Project Engineer for Shelby American starting 1964 on GT350 and GT500, design and building of GT-350 R-model race cars, followed by Trans Am cars and serving as race team engineer for the Shelby Mustang Trans Am team. National championships in 1965, 1966 and 1967 resulted.

Racing
Every year the PVGP has Shelbys racing at Pitt Race. Below you will see Robert Andersson in his Shelby Cobra leading two Shelby GT350s. Jim Dolan will be there in his Shelby GT40 and Shelby Cobra. For more details on vintage racing please visit our Shelby Racing Page. 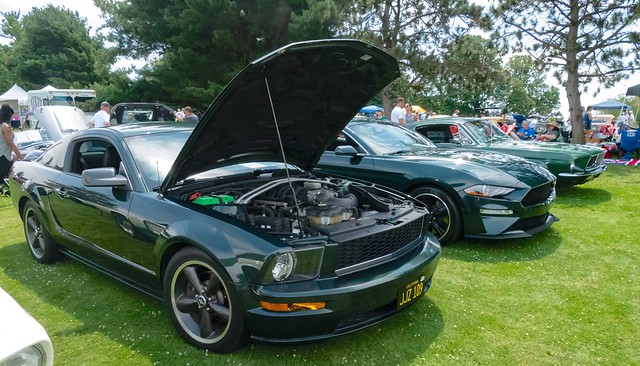 Race Week
The celebration continues as Shelby and Mustangs will be featured throughout the PVGP Race Week events, appearing at car shows and parties around Pittsburgh. See schedule below for details and links.

Shelby & Mustang Display at Schenley Park
The celebration of Carroll Shelby culminates in Schenley Park for a 2,500 vehicle car show and vintage  races through the streets on the July 20 and 21 race weekend. Shelby and Mustang owners will park in a special show and have the option of a parade lap on the track Sunday. There will be a special display of significant and historical Shelbys and Mustangs at Schenley Park, including racing GT40s.

The Marque of the Year display at Schenley Park will include all years of Mustangs, Shelbys, GT40’s, Ford Shelby F150 trucks, Sunbeam Tiger’s and Ford powered Shelby licensed continuation and replica cars such as Superformance, Factory 5 and Backdraft. Non Ford powered Shelbys’ such as Vipers and Dodge Omni GLH are welcome to be in the International Car Show, but would be displayed within a Shelby Mopar display in the American Car Show.

Sunday, July 14 – Pitt Race Complex
– Vintage Shelbys will race in Group 5 “Ground Pounders”
– – Take a lap in a racecar at lunchtime GT40 Lap
– Historic and vintage cars on track with winners recognized in the Hofbrauhaus Winners Circle.
– Admission is $20 per day, children 12 and under are free. Hours are 9 AM – 5 PM
Details

Sunday, July 7 – Kick-Off Rallye
– This is a fun and friendly rallye through the countrysides of Pittsburgh
– It starts and finishes at Red Robin at Pittsburgh Mills
– Meal and awards are included with a special category for Mustangs
– $75 per 2-person team

Saturday, July 13 – Blacktie & Tailpipes Gala
– Our formal event at Carnegie Museums of Art & History in Pittsburgh
– Car show at museum with all Mustangs  parked in a special area
– Dinner and dancing in the Music Hall and Hall of Architecture
– $275 per person or table of 10 for $250
Details

Monday, July 15 – Walnut Street Invitational Car Show
– Invitational Car Show in Shadyside with 125 cars and an expected crowd of 5,000
– 12 Shelbys and Mustangs in the show selected by the Greater Pittsburgh Mustang Club
– Show is free to attend and runs from 5:00 PM until 9:00 PM
Details

Tuesday, July 16 – Waterfront Car Cruise
– This is an “open to the public” car cruise from 4:00 – 9:00 PM
– Waterfront Shopping Center in Homestead, 5 miles from Schenley Park
– $5 donation to be in the show that features 750 cars of all types
– Special display area for Mustangs and Shelby owners
Details

Wednesday, July 17 – Downtown Parade and Car Display
– Cars meet at Station Square and parade into downtown Pittsburgh at 11:00 AM
– Three plazas will host car displays until 2:00 PM
– $10 donation to be in the parade and car show
– Shelby’s and Mustangs will be parked at PPG Place and Market Square
Details

Wednesday, July 17 – Tune-Up at Heinz Field
– This is a car themed party at Heinz Field, home of the Pittsburgh Steelers from 6:00 PM – 9:00 PM
– $50 donation per person, includes two complimentary drinks
– Additional $25 to put your car in the Showcase Show around the outside of Heinz Field
– Steeler locker room tours – $20
Details

Thursday, July 18 – Passport to Elegance Jet Center Party
– This is an exclusive party at the Voyager Jet Center at the County Airport in West Mifflin

Friday, July 19 – Forbes Avenue of Speed
– This is a race car parade from the paddock to nearby Squirrel Hill that starts at 6:30 PM Saturday, July 20 – Marque of the Year Car Exhibit
– Watch vintage races through the streets of Schenley Park all day
– Be a part of the International Car Show on the Bob O’Connor Golf course with 2,500 vehicles
– Shelby and Mustang Car Weekend Display. Cost is $65 for the weekend.  (no single day rate available)
– Participants receive commemorative PVGP Race Program, decal and special parking for weekend
– No cost for spectators, but donations for our charities are encouraged
Details Sunday, July 21 – Marque of the Year Car Exhibit
– Watch vintage races through the streets of Schenley Park all day
– Be a part of the International Car Show on the Bob O’Connor Golf course with 2,500 vehicles
– Shelby and Mustang Car Weekend Display. Cost is $65 for the weekend.  (no single day rate available)
– Participants receive commemorative PVGP Race Program, decal and special parking for weekend
– Opportunity to drive your Shelby or Mustang on track for parade lap at 11:00 AM for a $25 donation
– You must be registered in the show to take the parade lap
– No cost for spectators, but donations for our charities are encouraged
Details

The PVGP hosted the national BMW Car Club’s Oktoberfest convention in 2018 and it was regarded as one of the best ever. Pittsburgh is building a reputation as the destination for national car club conventions and gatherings.

The Greater Pittsburgh Mustang Club is a longtime supporter of the PVGP and they are enthusiastically leading the charge for our Shelby & Mustang Marque of the Year efforts. Jason Uhler has assembled a team of volunteers.

If you are interested in being a sponsor at any of the Shelby/Mustang events at the 2019 PVGP, please contact Dan DelBianco. Here is a PDF for PVGP Shelby Marque Display Offerings