PVGP Sponsors, partners and volunteers gathered on October 24  at the Hofbräuhaus on the South Side to take a victory lap. More than 200 people were on hand to celebrate another successful year. This year-end event recognizes the contributions of our sponsors, partners and car clubs and honors our volunteers who make this event possible. 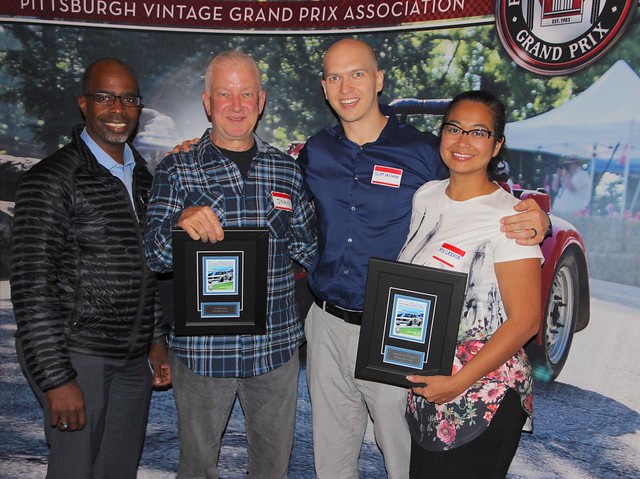 The PVGP Charity Ambassadors were presented plaques and we sincerely appreciate their presence – it helps remind us what we are working for. A select group of PVGP volunteers were honored with checkered flags for outstanding effort in 2018. Sponsors, partners and car clubs were recognized with framed posters and plaques – see the photo gallery above.

The “Voice of the Vintage” Ted Sohier opened the program and Executive Director Dan DelBianco introduced sponsors. PVGP chairman Jim Dolan recognized past board members and toasted the event with a drink from the Kastner Cup.  Showside Director Bob Speer gave a toast and introduced car clubs. Record Marque of the Year Donation
BMW was the PVGP’s 2018 Marque of the Year and more than a dozen members of the local and national clubs were on hand to unveil the record setting efforts. With the help of the BMW CCA, bringing their national Oktoberfest event to Pittsburgh and the tireless efforts of the local Allegheny Chapter – a record $126,500 was raised! The Pittsburgh area BMW dealers led by Rahal BMW fueled the record with sponsorship and generous donation of auction items. These record funds included individual donations, track rides, event tickets, racer entry fees and merchandise, with the largest portion coming from entry fees to the O’Fest gathering at Schenley Park. In addition to a financial record the BMW club set another record with 750 cars parked on the golf course. The previous record of $75,300 was set in 2013 by Mustang and the Neighborhood Ford Store. Thanks to all the participating car clubs and a heartfelt congratulations to the BMW Car Club of America!
This time of the year is when the check was usually presented to our charities – but that special moment will take place on a much larger stage at the 2019 International Car Show’s “Dancing With the Cars” party at the David L. Lawrence Convention Center on Thursday, February 14. To show our appreciation we held a drawing for 2 tickets and the winners were Jeff Duxbury from the Bob O’Connor Golf Course and Tim Swisher from the BMW Club.

Details and past Winners