Attend one of the most Spectacular Vintage Races in the world – and Party ARPCA style! The Pittsburgh Vintage Grand Prix is the Club’s biggest annual event. Come join hundreds of your fellow Club members, guests from other regions, and friends they gather on the lawn at Schenley Park to enjoy their cars, races, and above all, the camaraderie that has grown over the years. The PVGP takes place in scenic Schenley Park in the heart of Pittsburgh.

The Grand Prix congratulates the Allegheny Region of the Porsche Club of America for their tremendous support of our event since the beginning. Each year they stage one of the largest and most impressive displays in Schenley Park.

Anchoring German Hill, the Porsche Club has been one of the Grand Prix’s largest and most supportive car clubs over the years. Its members have played key roles in the growth and success of our car shows and races.

In 2020, the Allegheny Region of the Porsche Club of America took a leading role in the Pittsburgh Vintage Grand Prix’s efforts to raise funds for our charities”. Because of the COVID-19 Pandemic, the annual 10-day PVGP was canceled. Instead, the PVGP announced the organization would engage in a “Shifting Gears” campaign for the remainder of the year to raise money for its charities. Local car clubs and supporters staged 26 events that allowed them to safely be together and enjoy meeting with their cars.”

Ed Rice and the Porsche Club raised $6,100 with Parade Laps in Schenley Park on Sunday, July 26, the normally scheduled Race Day. “The impromptu event was a stunning success,” according to Ed Rice, president of the Allegheny Region Porsche Club. “I was in a melancholy mood when the event was canceled and I just didn’t want to sit around and do nothing that weekend. Then I thought, what the heck, every year in the days before Race Weekend in Schenley Park I drive the racecourse to get into the vibe of the PVGP.”

Read the full details in the September issue of Rundschau – the club’s newsletter. 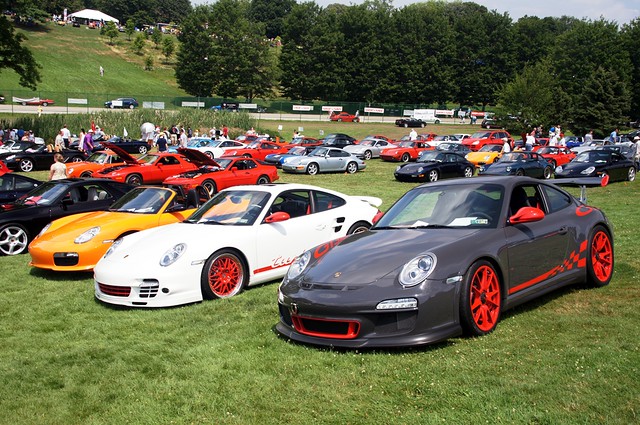 Plan to attend the 39th annual Pittsburgh Vintage Grand Prix with ARPCA on July 24/25.  Join hundreds of your fellow club members, guests from other regions, and friends as we gather on “Porsche Field” in Schenley Park to enjoy our cars, vintage races, and the camaraderie that defines PVGP weekend.  The Pittsburgh Vintage Grand Prix is our club’s largest fundraiser of the year. Details and Registration

Remember, you must Pre-Register to guarantee a spot in Porsche Field with the ARPCA directly.

2011 was the 50th anniversary of the Allegheny Region of the Porsche Club of America. On March 25, 1961, 31 Porsche owners and P.C.A. members gathered at McSorley’s Restaurant in the North Hills to form their own P. C. A. Chapter. Visit the Allegheny Region’s website to learn more about their history. Porsche was the marque of the year in 1994 and 2002, each time they set a record for charitable funds raised by the marque including 2011 when $73,500 was raised from the Marque and $200,000 was split between our charities. The PVGP is looking forward to having Porsche as Marque of the Year in 2022!